The Hare in Art 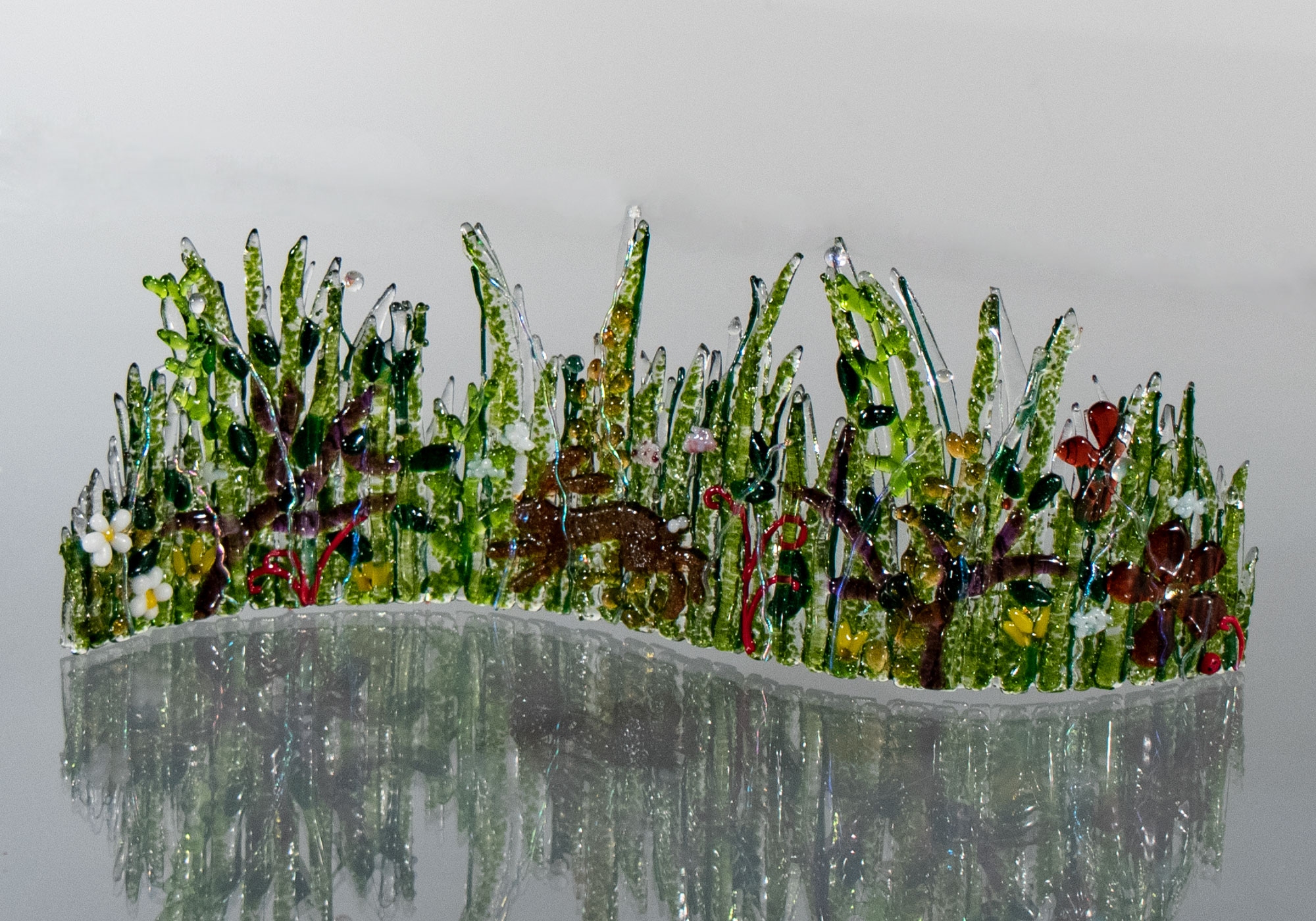 I have been creating fused glass tabletop pieces that are made up of long, thin pieces of glass, cut from glass sheets.  It has been a long process with many mistakes and a learning curve. Cutting the 3-4″ long, thin blades of grass is not easy, and getting the fuse just right took many experimentations. Many of my first attempts broke apart. I want to achieve the balance between fragility and an art piece that can be moved around without fear of breakage. I am finally getting most of the details right, and now having fun with this form. 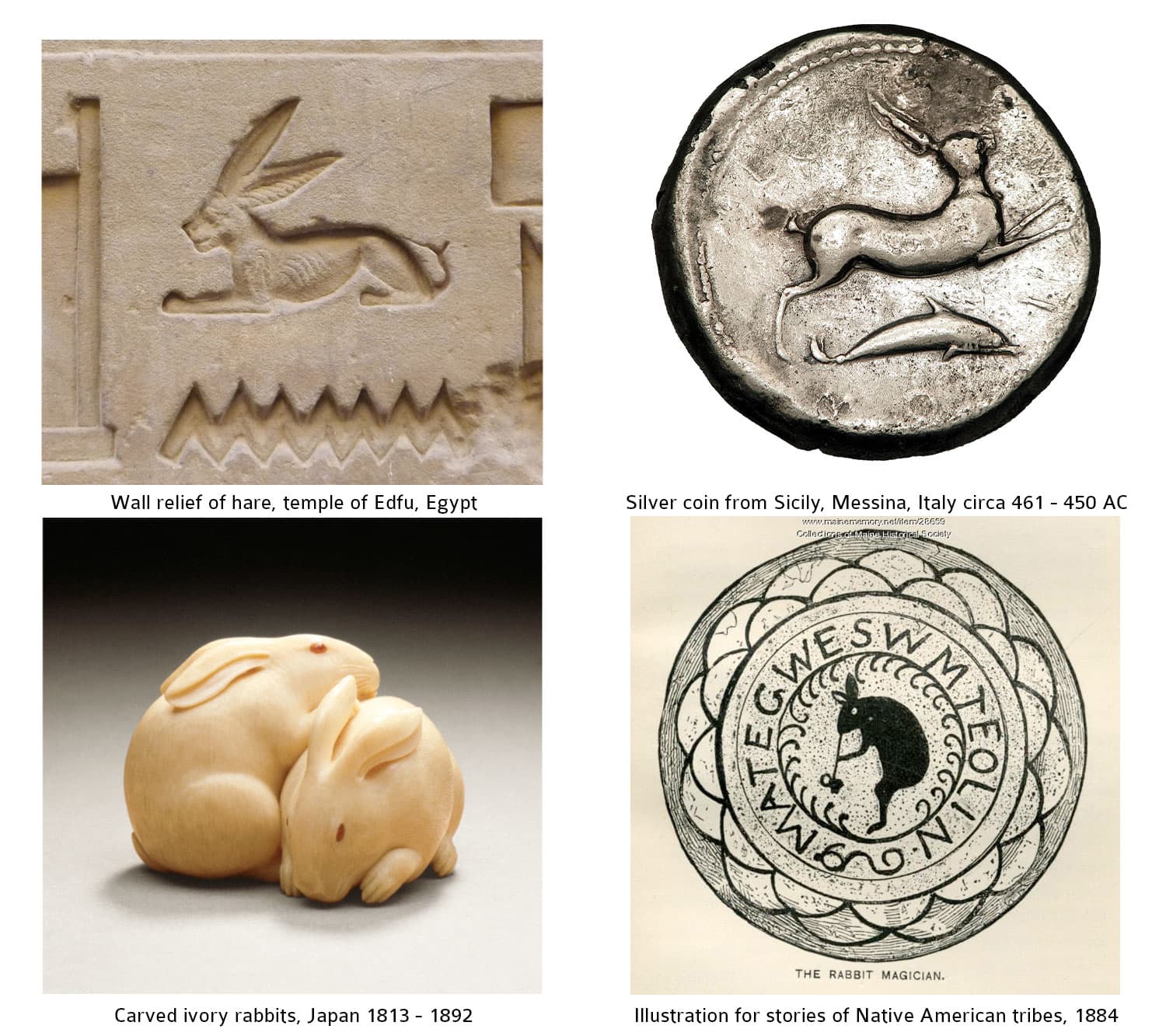 Delving into folklore, I found the image of the running hare.  This relative to the rabbit hops up (sorry!) in imagery from around the world.

Hares are tricksters, and often symbols of new life, rebirth & fertility. They are often associated with the moon, and pagans believed moon-gazing hares would bring growth and abundance. In East Asian culture, the Moon Rabbit lives on the moon.  Although, the hare must not be confused with the rabbit, as they are entirely different species.

The hare’s elusive nature, and the fact that it is nocturnal, may form the basis for its reputation as a magical creature, with mystical links to the moon.

The mysterious Three Hares symbol appears throughout the world, and can be found in many religions & cultures.  The earliest record of this symbol is in Chinese cave temples dating back to the 6th & 7th centuries. Researchers continue to delve into the meaning of the Three Hares.

The symbol shows each animal with one ear, but sharing an ear with the next, so that all appear to have two ears. 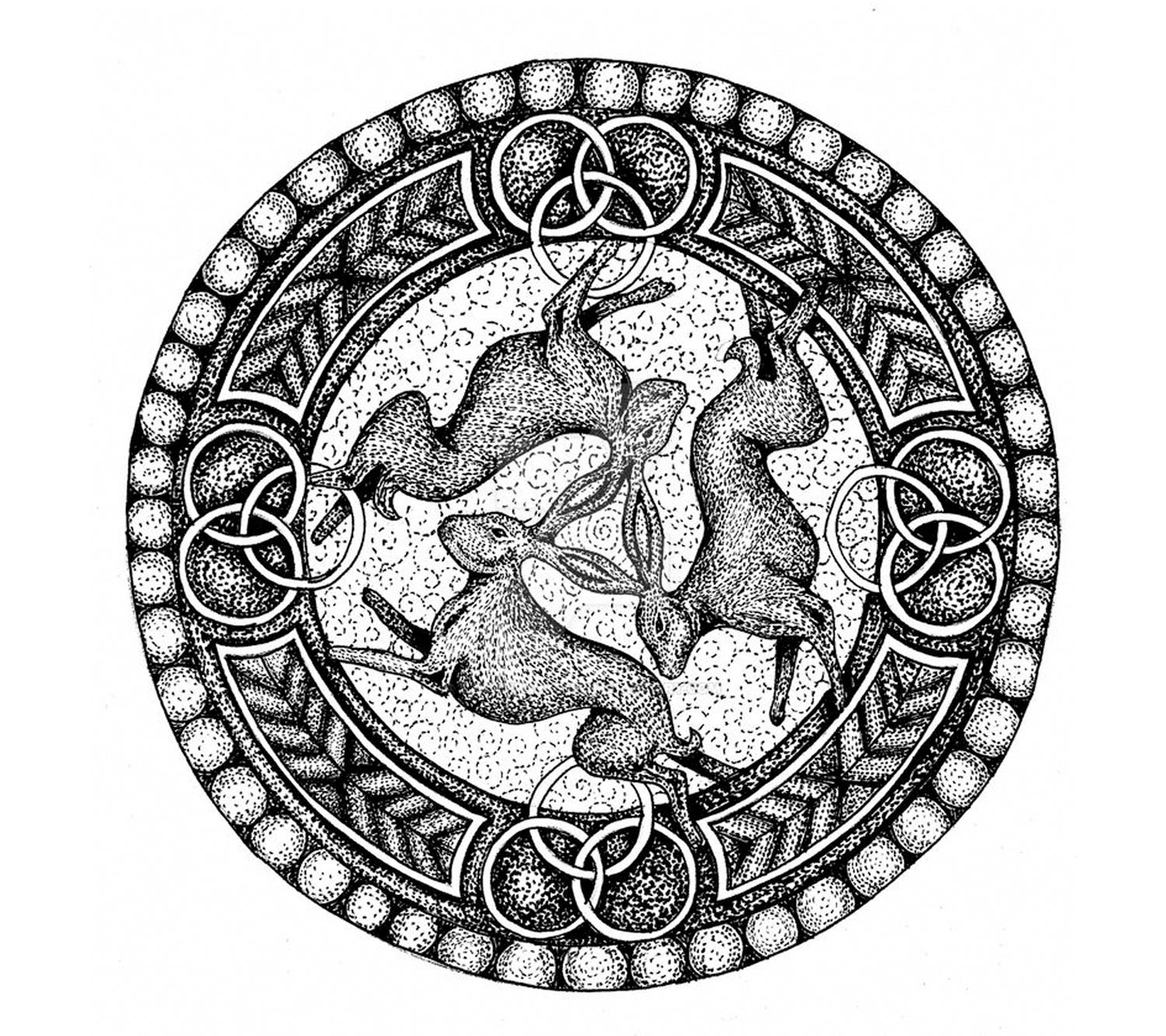 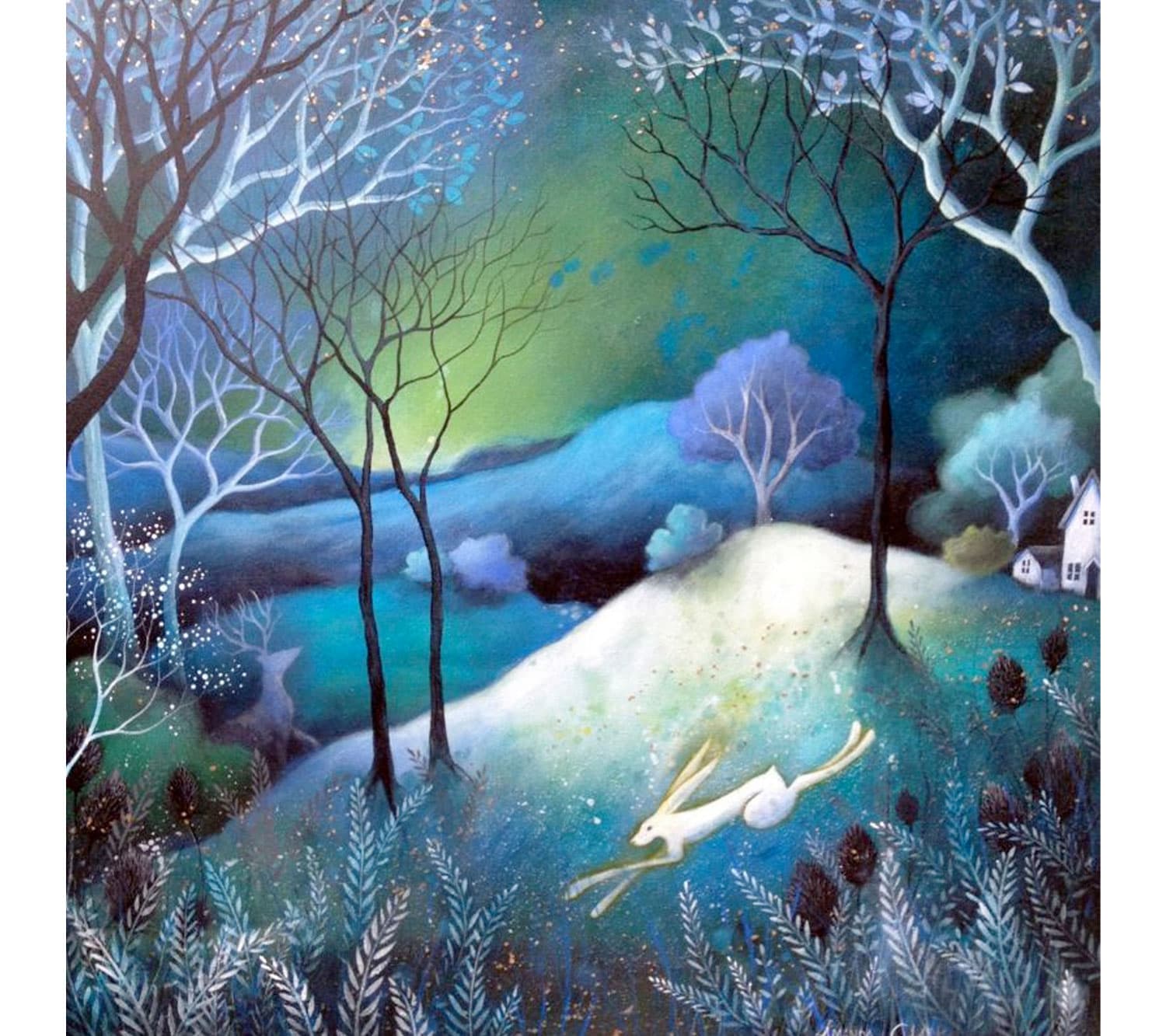 In China, it is believed that the three hares represent peace and tranquility. In medieval Europe, it was seen as a warning of temptation, the symbol interpreted by some as a visual message urging churchgoers to confess their sins. In ancient times it was believed that hares were hermaphrodites and could reproduce without loss of virginity, which ties into Christian beliefs associated with the Virgin Mary. Jewish, Persian, Korean and Japanese cultures associated the hare with goddesses of immortality.  Theories abound, and there are no definitive answers, just a complex web of myth and magic that surrounds this creature.

Hares are interesting animals. They have extra long ears and extra long legs, giving them a wonderfully delicate sense of hearing and the power to run from predators. Baby hares can live on their own about an hour after birth, and they prefer to live alone in simple nests above the ground. They are much larger than rabbits. Hares are nocturnal, except during the breeding season. During this time, they might be seen dashing around the fields like “mad March hares”, boxing with each other. Males box to fight for social dominance, while females box to fend off overly aggressive mating males. 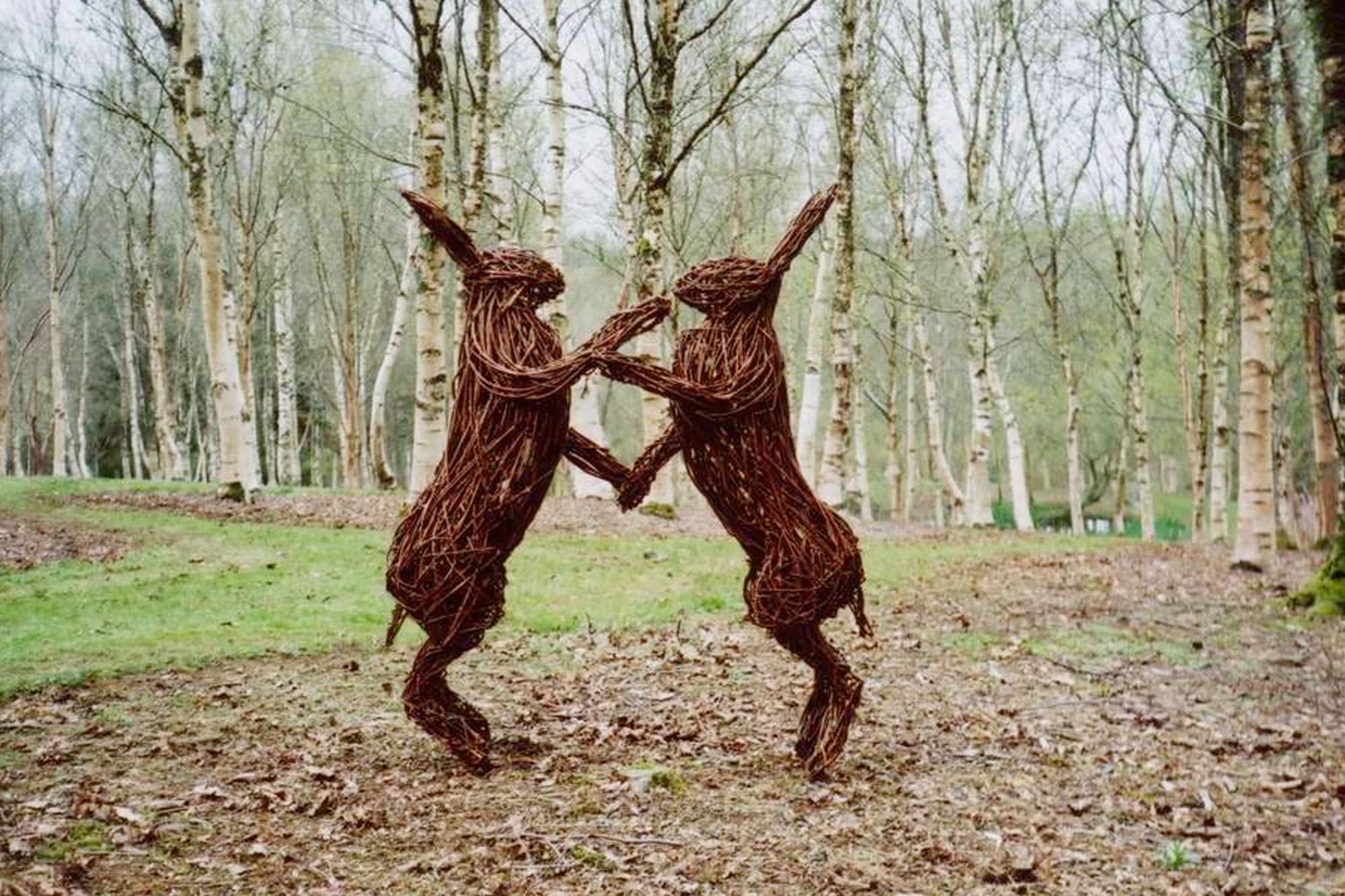 The running hare weaves its way through spiraling stems and fantastical flowers, between blades of reflective grass that catch the light in iridized flashes of color. The Hare brings thoughts of mystery and magic into your space.