Fishermen in India use weaving technique to create their functional fishing nets.  Janel Echelman has taken this time-honored workman’s craft to a new level. 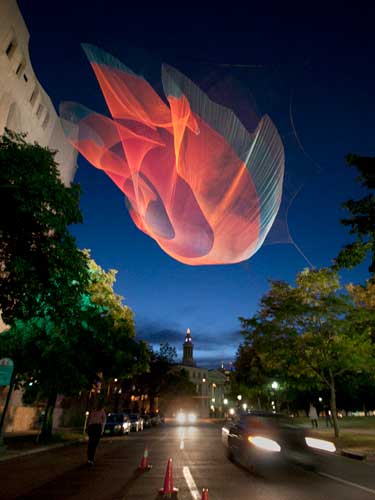 This sculpture illuminated the Denver sky in July and August of 2010, gently flowing in the breeze above the city. Her inspiration was the 2010 earthquake in Chile, which shortened the length of the earth’s day be 1.26 microseconds due to slightly redistributing the earth’s mass. 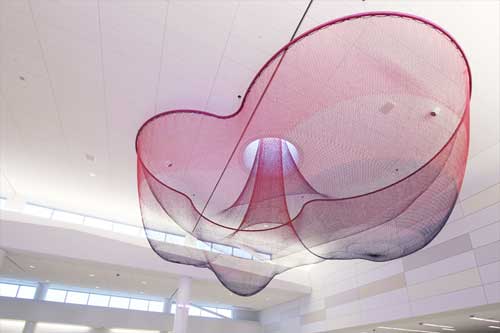 Her newest commission is installed at the San Francisco Airport, descending from three round skylights cut into the ceiling.  The shaded outlines below the netting reflect the precise shadows that would occur on the summer solstice if the sun could penetrate through the roof. 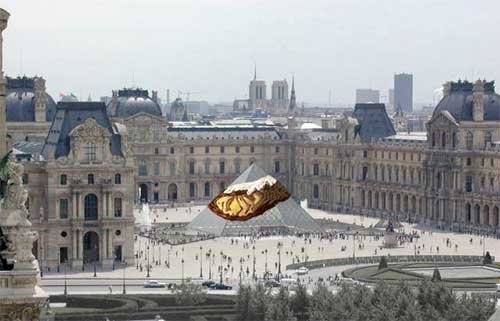 This piece is theoretical, and currently under construction for the temporary art festival in France, “Nuit Blanche.” The title is a reference to Delacroix’s iconic painting “Liberty Leading the People”, and the image of Marianne is widely considered a national emblem of France.

Visit Echelman’s website to see more of her work, and take a look at her Bio – the story of how she first began working with the net form is serendipitous. www.echelman.com/site/biography.html