Next time you make a mistake at work, think of this story and maybe you won’t feel so bad.  A dedicated German cleaning woman diligently scrubbed away a stain on a piece of artwork.  Only it was part of the artwork.  And the piece was worth about 1.1 million dollars. 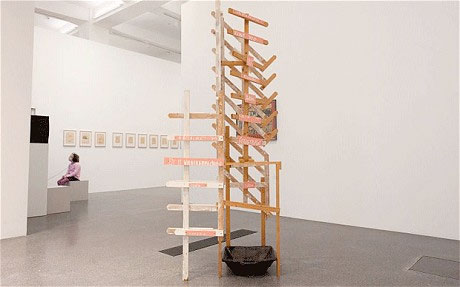 The artwork includes a plastic bowl painted to look discolored by water.  The cleaner thought it was an actual stain, and scrubbed the bowl until it looked brand new.  The poor woman was unaware that museum ruled prohibit cleaning staff getting within 20 centimeters of any piece of art. The museum reported that it is now impossible to return the work to its previous state.

“Kippenberger, a German artist known for working in a variety of styles, died in 1997. He was the leader of a group of German “bad boy” artists that at emerged in the wake of Neo-Expressionism, and made as much trouble as he did art, appropriating other artists’ work and once buying a gas station in Brazil and naming it after himself.”
– from The Washington Post

← Previous: Floating Works Next: A Visit to Turkey →